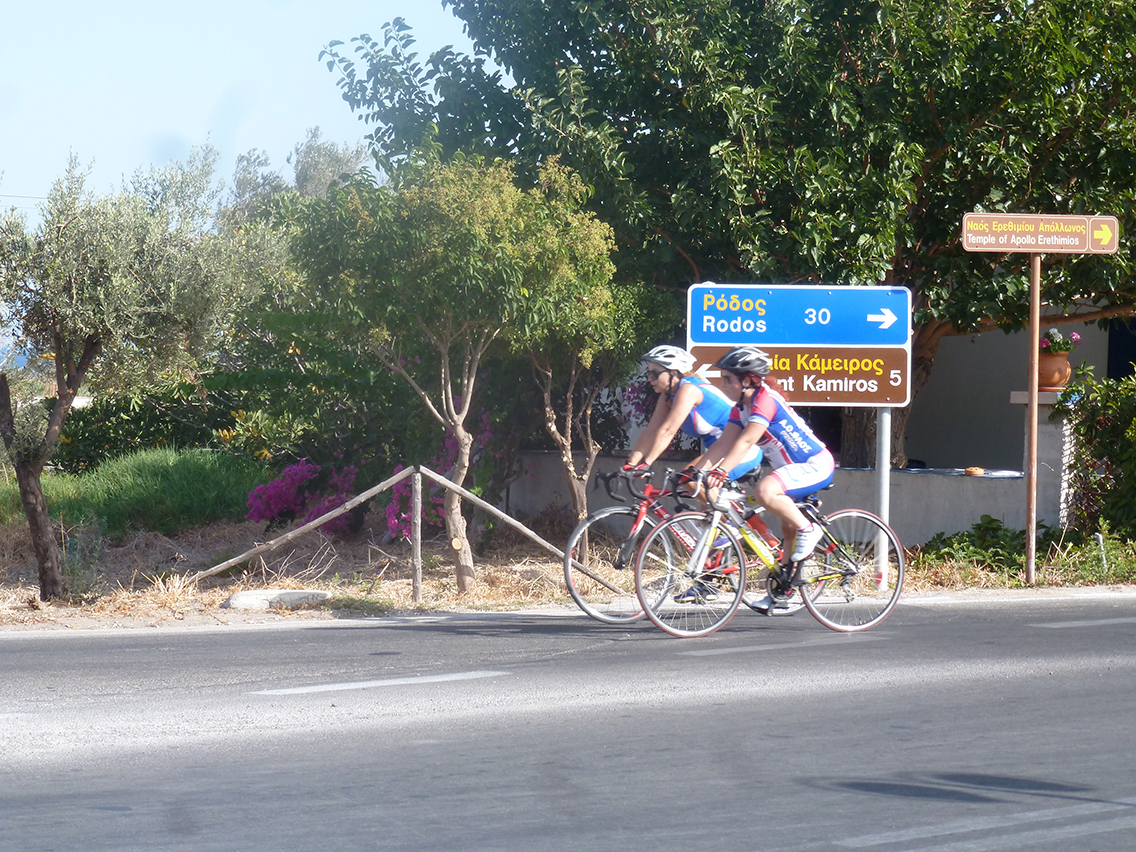 Rhodos, with its capital of the same name in the north, is the largest island of the Dodecanese and is situated in the south-eastern part of the Aegean Sea. The strongly elongated territory contains mountains and valleys and plains full of olive trees, together with sandy and stony beaches.

Due to the fantastic infrastructure the islands allows for challenging bike tours, for example from coast to coast, letting you become familiar with the Greek culture and its nature. In addition, the enormous hospitality by the local people will make you enjoy the fine culinary cuisine!

Dates:
Options are available for April, May, June, September or October 2020!

Price:
€ 995,00 per person**. **
The Rhodos Race-cycling Challenge 2020 takes place with a minimum of 6 people. They will be informed 4 weeks before the planned departure, in case the trip is cancelled. As soon as the minimum number of participants is reached, they will be informed immediately.

Making a reservation is no booking (yet)!

DAY 1 (D)
International flight to Rhodos and transfer by taxi to the Meliton Hotel in Theologos (7 kilometers). The hotel with its swimming pool is located in the natural environment just outside the village. Here the rental bikes are presented and/or the private bikes are prepared for the cycling tour. If time allows and/or if participants want to do so, a test bike ride will be organised.
Dinner in a restaurant along the old central square in the village of Theologos.

DAY 2 (B-D)
The Coast-to-Coast cycling tour is programmed for today. The 84 km route starts on the west coast, entering soon the green interiour of Rhodos. Close to the Petaloudes valley of butterflies (the butterfly season runs from June to September!) a steep climb starts along the Kalopetra monastery.  Following this challenging climb we stop at the altitude of the Kalopetra pass to enjoy coffee on a terrace with beautiful scenery. The descent leads the bikers along Psinthos, arriving on the east coast near Afandou, as the tour continues in the direction of Kolimbia. Here an impressive avenue with boarders of Eucalyptus trees brings us back to the interior via a small road, climbing its way to Archangellos, the second largest village of the island.

Going down through a valley full of orange trees, we climb steeply along a brand new road leading us through a completely rural and desolated landscape. The tour now leads us to Apollona at the foot of the Profitis Ilias mountain range. The southern slopes offer us challenging climbs with inclinations of sometimes more than 10%. Along a densely forested ridge the road runs eastward , before a long descent brings us back again to the west coast, where dinner on the sea shore is awaiting us in Theologos.

DAY 3 (B-D)
Today brings us the 80 km ‘Road to the wine’. Directly along the west coast we drive southward, where moderate slopes of an interior road loop between Soroni and Kalavarda lead us into the interior of the island. Reaching the village of Kalavarda a visit to a local vineyard can be included in the tour. Just beyond Kalavarda we will see the beautifully located remnants of the ancient city of Kamiros, followed by a gorgeous stretch of untouched coastal territory. The fishing harbour of Skala Kamiros forms the end of biking over flat and slightly sloping roads: a 10% climb takes us to Kritinia before winding slopes lead us around the Ataviros, with its 1215 meters the highest mountain on the island of Rhodos. On these slopes the wine village Embonas is situated where we visit (and drink specimens of wines!) the Emery wine cellars as well businesses of other local winegrowers. The Ataviros Hotel is the only hotel in Embonas and is run by a very hospitable and friendly Greek family. It offers one of the nicest and most beautifully located swimming pools of the island of Rhodos; along the pool we’ll finish the day with an excellent dinner. 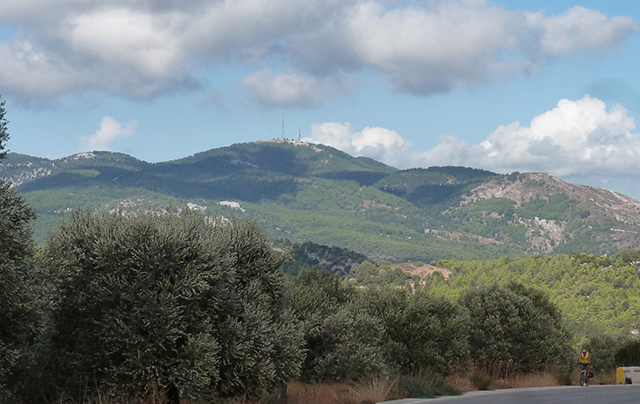 DAY 4 (B-D)
This day is for leisure, allowing participants in this program to enjoy wine-tasting, ‘lazy moments’ alongside the hotel pool or walking through the endless vineyards in the surrounding area. Those inclined to do so, mountainbikes can be brought in to facilitate climbs along the slopes of the Ataviros mountain. The 5 kilometers long road to the top is partly unpaved, pretty steep and runs through magnificent scenery. In total this mountainbike ride takes 30 kilometers and brings you back to the Ataviros Hotel, where after dinner a good night’s rest will prepare you for the follwing day.

DAY 5 (B-D)
Today’s tour of 107 km will take you through nice villages and along some splendid monasteries. On the western slopes of the Ataviros mountain the honey village of Siana welcomes you, followed by delicious coffee on the terrace of Christos Corner in Monolithos. In combination with a beautiful scenery, one might enjoy here too the famous Greek pastry. A long descent leads you to the lively village square Apolakkia. A final road along the west coast awaits us, before a steep climb takes us through completey desolated territory. Here we visit the first monastery of today, the Skiadi Monastery, the oldest on the island of Rhodos. Guests, including us as cycling bikers, are welcomed with water and cookies. Probably the most isolated village of the island is Mesanagros, where the Michalis tavern has enjoyed growing popularity, due to its mention in a German tourist guide. During the descent the route takes us through Lachania, where it proofs being worth while to take an attractive alley tot he village square.

The next 10 kilometers through flat territory along the east coast allow for some rest and recovery, before beginning the next part of today’s tour into the mountains surrounding Asklipio. This village harbours the oldest church of Rhodos and gives way along more moderate slopes to the second monastery of the day: Moni Thari, with its beautiful Byzantine church. The next and today ’s last village is Laèrma that leads on to brand new roads with steep curbs along the slopes of the Ataviros mountain, after which dinner and lodging are enjoyed again in the hotel of the same name.

DAY 6 (B-D)
Today’s 75 km tour is the last on the island of Rhodos and follows for most of its course the watershed between the west and east coast. It takes us along the full length of the Profitis Ilias mountain range, starting with a 4 km climb containing 10% inclined slopes. These lead us to Eleousa, an ancient and collapsed Italian garrison town, reminding us of the historical fact that Rhodos belonged to Italy during the interbellum. Next, the road between Archipoli and Psinthos offers us definite challenges with short but steep climbs, followed by a pleasant ride over forested ridges. After our visit to the village of Pastida we climb the Filerimos mountain, where on the top the remains of an ancient antique city and a medieval monastery can be viewed. 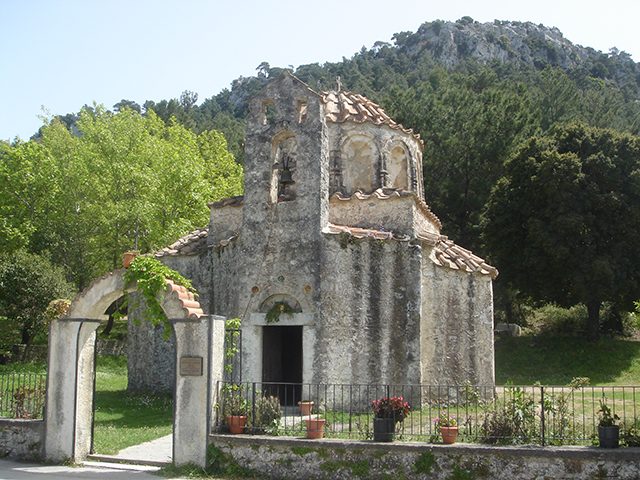 When interest is shown among participants, the climb of the Filerimos mountain can be undertaken as a time trial. The descent follows the same path and leads along some final, but moderately steep slopes (with 4 very sharp curbs!) into the city of Rhodos. Next, the tour takes us over Monte Smith, with its ‘Acropolis’(Temple of Apollo), an ancient stadium and remains of a small theatre. Undoubtedly, there will bes ome time for a foto shoot.
Our lodgings today are to be enjoyed in the Amphitryon Hotel on the partition between the ancient and contemporary quarters of Rhodos city. Dating back to the age of the Crusaders, the ancient city of Rhodos has been designated UNESCO-inheritance. Its city wall, still totally intact, encompasses with its 3 km length the entire medieval town, which is open for this afternoon’s and/or evening’s sight seeing.
to finish this day in style, dinner will also be served somewhere in this ancient city!

DAY 7 (B-D)
This morning at 09.00 h a boat takes us to the island of Symi, situated in the waters between Rhodos and Turkey. Upon its arrival at 10.30 h we visit the enormous and beautiful Panormitis Monastery, after which a further boat trip brings us to the Symi capital, north on the island where we arrive at 12.30 h. Hystorically, Symi has grown to be an important trades harbour, enjoying fiscal privileges during Turkish accupation. Also the spunge fishery has brought further prosperity to Symi city. The present day village still shows this richness with its colourful houses, surrounding the harbour in amphitheatre style.
The boat trip back to Rhodos city leaves Symi again at 16.30 h, where we arrive at 18.00 h.
When interest is shown among participants, this boat rip can be combined with a bike ride, starting at the Panormitis Monastery and bringing us to Symi city. Although it only takes 20 kilometers, one is challenged by climbing slopes up to 500 m altitude.
The final dinner is enjoyed in the Meltemi restaurant directly along the seashore.

DAY 8 (B)
Today we hand in the rented bikes or pack our private bikes in order to be transferred to the airport.
In case of a late flight an extra bike tour can be programmed, bringing us to Kalavarda from where the final transfer takes place.

This price covers the tour as described in the DAY TO DAY program. Measure-made adjustments of the tour are optional and may require extra costs.

Prices include:
International return flight The Netherlands – Rhodos
All local transfers, including luggage transfers between hotels
Lodging based on double room occupation
Welcoming drink at arrival on DAY 1
All meals mentioned in the DAY TO DAY program
B = Breakfast
L = Lunch
D = Dinner
Technical assistance by local road service and bike repair man in the corresponding hotels, including information on next day’s bike rides
Tour descriptions with maps and/or routing schedules on GPS
Tickets for the boat trip to Symi

Not included are:
International transfer of your private bike (around € 60,00)
Surcharge for a single room (€ 135,00)
All meals that are not mentioned in the DAY TO DAY program
Travel and Health insurance
Cancellation insurance
Optional/additional excursions

One can bring one’s own bike (transfers between airport and hotels are included). Renting race bikes on Rhodos is also an option; prices (depending on the subsequent model) vary from € 135 up to € 180 for 7 days. The most expensive bike is a Focus with a carbon frame and Campagnolo Record bicycle parts. FIT Adventure Sports Travels will make the bike reservation at a local bike shop, where one can pay the rent for this tour.

Our vision and mission
FIT Adventure Sports Travels offers you the opportunity to turn your endurance sport into an adventure. We organise sports travels in areas of natural beauty, almost untouched by (mass) tourism and in doing so, offer you the unknown and unexpected. You will experience basic outdoor living in foreign countries, combined with local standards of modern life circumstances. We closely work together with local people and create employment.  Thus avoiding, that people leave the country side for a life in the city and doing so, preventing that old traditions and cultures get lost.

Reviews and evaluations of former participants in our sports travels include reactions such as:
‘Sheer amazement because of the natural surroundings and the constant variety in traveling experience, from traditional to modern’
‘Wonderful surprises regarding the acquaintance with the every day authentic life of the local people’
‘You start out as an indivual, but you will finally end up as a group’
‘I enjoyed very much the constant focus on individual performance levels’
‘No extreme sports is forced upon you, but you gradually learn to reach your own maximum level of performance’